Why do we find parenting so hard?

A common complaint is that parenting today has become too complicated. We look back on our own childhood as an idyllic time with minimal parent involvement and share images like the one below on Facebook. 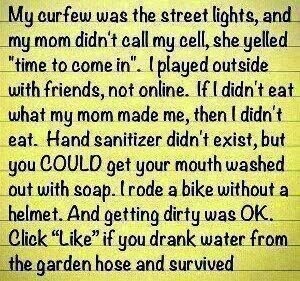 Then we resecure the childproof safety fittings and look into booking our toddler into french class.

So what's going on?
Well in short we're scared. Scared of a world that seems to have gotten more dangerous since we wandered the streets until dark; scared that our child's life will be hampered by autism, ADHD or anxiety and scared that if we don't do parent in exactly the right way our children will grow up to be failures who are never happy in life.
These factors combine to increase our stress related to parenting and make us feel more worn out (1).
The good news is, that its all these fears are, much like a child's fear of the dark based entirely on perception rather than reality.

Fears about safety
Mothers today are more fearful of their children's safety and do not believe their neighborhoods are as safe a place to raise children as they did in the past. Due to this many mothers feel they have to monitor their children constantly (2). There is some reality to this perception, as more mothers are now in the workforce, there has been some loss of social cohesion and support within neighborhoods (3)
More importantly however the perception of danger in society has increased both in general and particularly towards children. This is due in part to rapid changes in society which have created a a feeling of unpredictably and danger in society for most people (3).  For parents, increased media reports of sex and violence towards children have also caused a change of perception of childhood from a time of predictably and safety to that of danger and vulnerability (4). This is not an accurate perception of the situation as child abuse (5) and violent crime towards children (6) have remained stable over time or slightly decreased.

Fears about development and behavior
Rates of diagnosis of conditions such as depression, attention deficit/hyperactive disorder (ADHD) and oppositional defiance disorder (ODD) have increased substantially since the 1970s (7). This increase diagnosis rate is due to improved diagnostic techniques and improved understanding of mental health rather than a change in actual prevalence (7). However, this increasing awareness of mental health in children has also led to parents becoming more vigilant  about monitoring their children's health,  increasing parents perception of child poor health and behavior and so increasing parenting stress (8).
In addition, in a bid to secure their children's economic future in a volatile job market many parents end up putting pressure on children's school performance. Normal child behavior seen in this viewpoint can be judged overly harshly and considered more problematic increasing parenting stress even more. This can lead to more concerns about behavior with harsher evaluations of child behavior and more diagnosis of problem child behavior (9)

Fears about failing
In the last few decades, it has become more and more commonplace to consider parents responsible for almost all aspects of a child's behavior and a development (10).  Parents in this environment feel pressured to optimize their children's intellectual and social potential and feel stress in their inability to do so. For example, mothers now days spend more time with their children than in the seventies (11) yet feel guilt over spending insufficient time with them (12). Like the other concerns, this concern comes from societal views and pressures rather than any genuine need.

It is hard to opt out from these pressures, especially when they are coming not just from the media but also from friends and family. However if you are finding yourself feeling anxious or beaten down by parenting, realizing that these are issues that are projected onto us by society rather than real concerns may help.