Occupational health and safety for mums

If we are going to continue with the rhetroic of being a mum being a full time job, maybe we should consider the role of some occ health and safety in it.
It was of great surprise to me when one and a half years into this parenting gig, I found myself beset by health problems the doctor described as 'common in young mothers' (I assume he meant mothers of young children as I am an average aged mother at best). As someone who had focused on eating well, attempted to excercise and had always been kind on myself to avoid the risk of postnatal depression I was most surprised to find that I had not avoided this motherhood thing unscaved.

Common health risks of motherhood
Note: Not neccesarily mine. 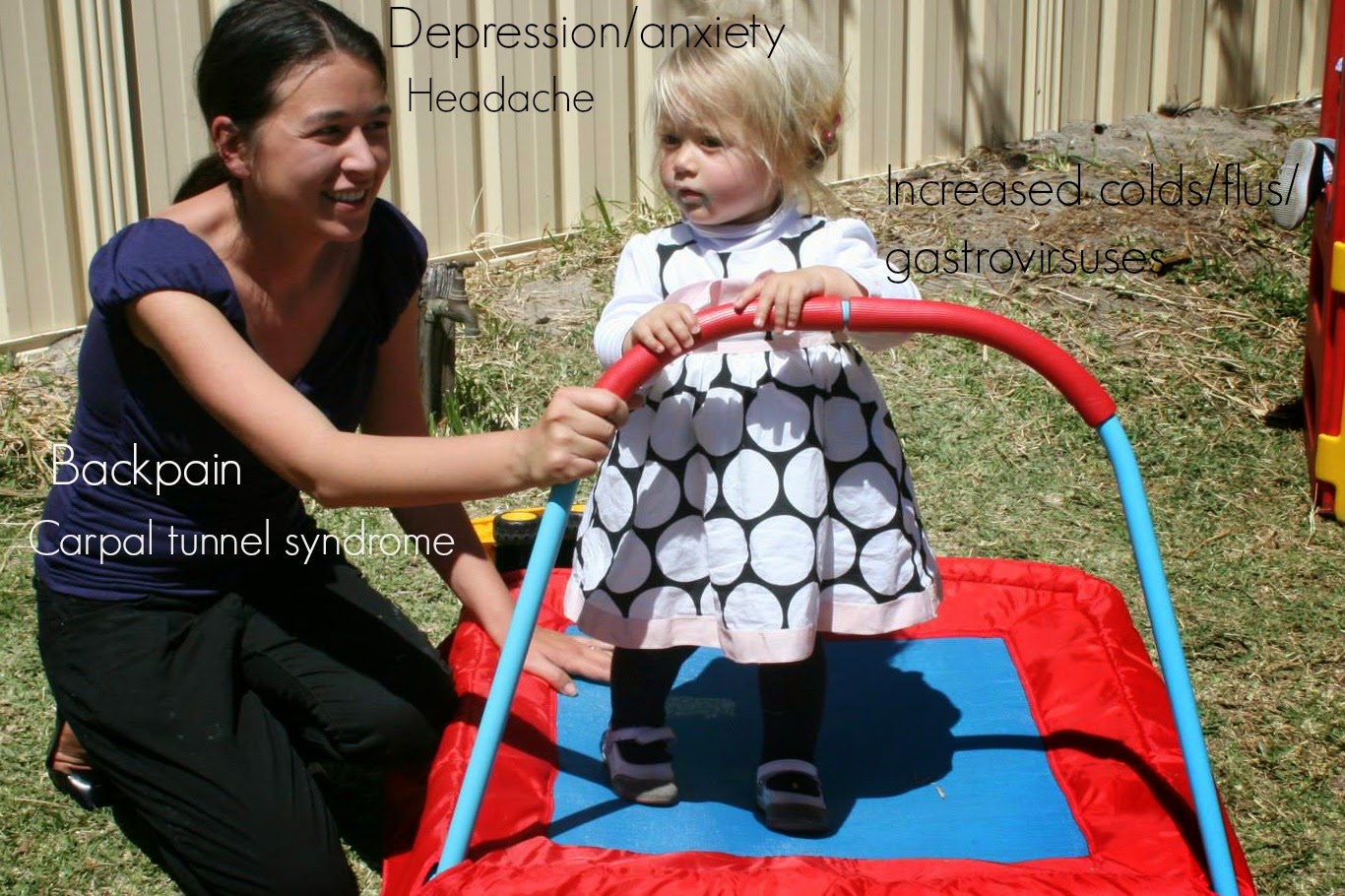 The depression and anxiety are well known risks of being a mother. The result of a change in social circumstances, new worries  and a chronic lack of sleep. The increase in headaches and migraines result from much the same. I am not going to dwell to much on them except to say what has already been said be kind to yourself, keep active, try and get some sleep. It is the other issues that I want to discuss more because they are not just a normal outcome of being a mother but rather the result of unsafe work practices.

Increase in infections
It often seems that the rate at which you get sick increases as your life can no longer support it. I was hugely surprised in MissC's second year at the rate at which I was coming down with colds, viruses and gastroinfections. It went from something like one a year prechild (and that's with working in a hospital) to about 20 with the little germ factory in my life. It makes a lot of sense of course when you consider how many new germs they are being exposed to and the fact that in wiping bums and noses you are being very closely exposed to those germs. There is also a very easy way to contain it. Wash your hands! Do it frequently, do it properly.
Of course you're washing your hands after you change a nappy and maybe you're even good enough to do it before you start to cook, but are you washing them before you touch any food? Before you put any food or anything else in your mouth? Before you touch near your face?
If you need a reminder here are the times you need to wash your hands:


If your life is anything like mine this makes it seem like you would just be constantly washing your hands. Rather than dismissing that as unrealistic, consider that there is a middle ground between constantly and three times a day and try and work within it. I try to just wash my hands whenever I think of it and have noticed a substantial decline in infections since then.
Try to also make it easier to wash your hands, you are unlikely to want to traipse off to the bathroom to clean up all the time but adding some soap wherever there is a tap and even setting up wash up stations of buckets of water can make it easier. Alcohol based hand sanitiser are also considered to be a good substitute for soap and water and are much easier to use. Remember to keep them out of reach of little hands though!
You should also revisit how you are washing your hands. The proper technique is not a rub of soap and a quick shake under the tap. 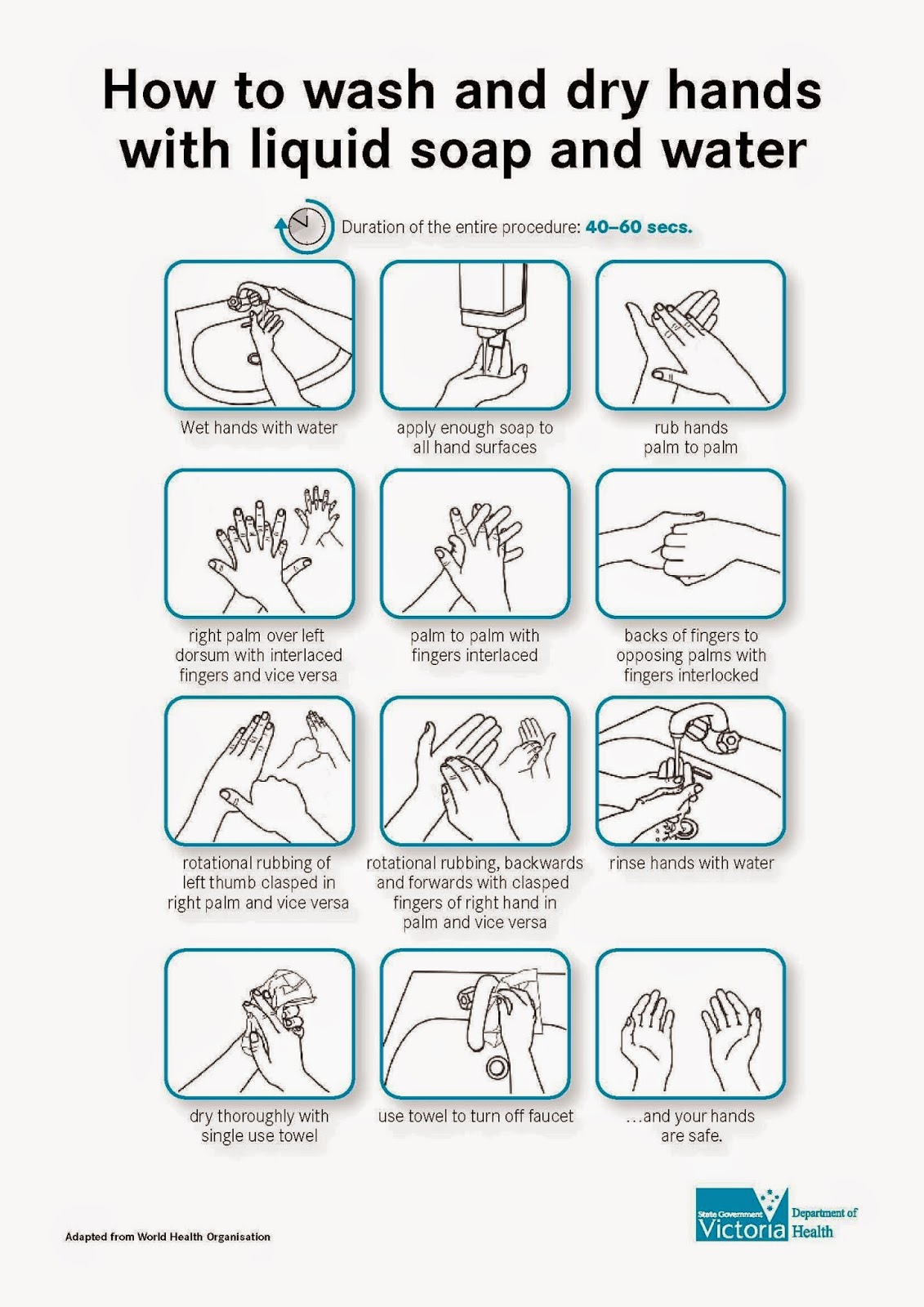 Backstrain
When I was in the hospital after having MissC the hospital physiotherapist told me with much shock in her voice about watching a mother just bend over to pick up her toddler. I think of the horror in her voice every time I do exactly the same to pick up the twelve and half kilo MissC and every time I watch every other mother do the same. So it is of no surprise to me to hear that studies have shown that mothers pick up their children in response to their children's needs with almost no thought as to their own backs.
Revisit how you lift your child, the proper technique is to squat down, hold them close to your body and lift using your legs. I also think this sounds a lot more pleasant for the child than being hauled up to their mother anyway. Where practical put them down or enlist the help of someone else when they are starting to feel too heavy for you to handle easily.
Get them to do things for themselves wherever possible to avoid you having to lift them. Things like climbing into the car, onto seats and even into bed are a good time to give your back a rest.
You should also be aware of your posture and try and strengthen your core muscles but the lifting is probably the biggest risk factor for mothers.

Carpal tunnel syndrome
Being a mother puts a lot of strain on your the nerves in your hands and wrist. First there's the fluid retention associated with pregnany, then the constant holding of a newborn and then there is a solid two to three years worth of nappy changes. These constant strains can trigger carpal tunnel syndrome which like backstrain can turn into a very painful lifelong problem if you do not take steps to remedy it.
A lot of these steps are quite pleasent really. For example, since the repetitive motion associated with nappy changes is a contributing factor you should try and alternate these with your partner as much as possible to rest your wrists. Housework is another huge contributor so any labour saving steps and sharing of household duties will help to reduce the strain on your wrists.
You should also use nursing pillows and proper posture when holding your baby for a long period of time and cut down on smart phone usage. Since it is the wrist positioning in both of these that put you at risk, the use of a supportive device can help save your wrists without you having to miss out.