Baby not sleeping: Is technology to blame?

So this week I saw this article claiming that 'research' said that exposing babies to blue light would disrupt their sleep.

“With the advent of social media, sometimes now we’ll find mothers breastfeeding and constantly checking their phones. Technology is really in your face so it was important to give an explanation as to why one shouldn’t have it on during quiet time with their baby and one reason is because of the blue light, which is detrimental to the sleep pattern. You are stimulating the brain when you want the exact opposite to happen.”

This was of interest to me for three reasons. 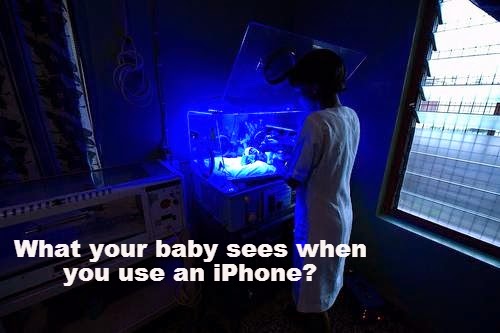 So let's look at the science.

The Theory
Human sleep patterns like that of all other animals are affected by light. Light colour varies throughout the day, red signals morning, blue light occurs in the daytime and far red light signals the end of the day. Due to this predictable day time variation, humans bodies respond differently to these different types of light. In particular, light of a wavelength that falls into the 'blue' spectrum wakes us up and increases alertness in particular by suppressing melatonin release. . Low levels of melatonin are often found in people with sleep disorders so suppression of melatonin release may be expected to disturb sleep 2.
All light including light bulbs release light that is in the blue spectrum but LED screens such as those seen in computers, smartphones and some televisions release extremely high levels of it. For this reason, there has been some suggestion that use of these screens may disrupt sleep.

The Evidence
There have been a variety of studies looking at the effect of use of blue light, particularly in the management of sleep disorders.  Although some of these studies included teenagers there were no studies looking directly at children or babies.
Generally these studies have found a change in melatonin release but no change in reported sleepiness 6, sleep duration 3  or sleep quality 4, 2. One sleep study did note that although the overall amount of sleep and amount of REM sleep was the same in both a group exposed to blue light and those not exposed, the sleep pattern of those exposed to blue light was different with less REM sleep being found in the early phases.
These studies however only assessed sleep in the short term (usually one night) and suggested that the melantonin changes may affect sleep quality over a longer period of time. One longer term study found that reported sleep quality improved after blocking all blue light before sleep for 3 weeks 5.
Of interest though in reviewing these studies is the length of blue light exposure required to stimulate these changes. The length of blue light exposure is considered to be an extremely important factor in its effect, more important in particular than intensity 6. The studies used at a minimum 2.5 hours of blue light exposure 2 and one that used 5 hours of blue light exposure considered it to be a short exposure compared to a real life situation 7.  In comparison, a mother putting a child to sleep is exposing them to a blue light for an extremely short period of time.
From looking at the research there may be an effect of prolonged increased blue light exposure on sleep quality. It is interesting to note that the study which showed an effect blocked all blue light for three hours prior to sleep. This would include blue light coming from light bulbs as well as light from TV and computer screens. It is not just 'new' technology that has changed our evening patterns. Another study also noted an increased tendency toward alertness in the evening in teenagers who lived in brightly lit areas as well as in those who used a lot of technology 8.

We live in a world where artificial lighting is increasingly used, in part to disturb our natural sleeping patterns.  There is no reason while babies will be exempted from this effect. However the effect of the increased blue light from smartphones or new televisions has a shortage of studies at this point to draw any conclusions.
If you were wishing to jump to a conclusion, it would be to limit extended screen time in children, teenagers and yourself for a better night sleep. Drawing any conclusions about short amounts of blue light on babies is too long a bow at this point.