One of the strongest myths about child development for boys is that of the testosterone surge in toddlers. The tired mothers of toddler boys will sigh and talk about 'a tesosterone surge at three.... as big as the change at puberty'.
Although well accepted and published in many articles and books about parenting. I have always thought that it sounded a bit strange. The testosterone surge in adolescence is associated with huge physical changes - none of which are seen in boys of three to four years of age. Boys of this age are not even experiencing a growth spurt let alone all the other changes that are seen in teenagers.  But lets have a better look at it anyway.

The story
If you google 'testosterone surge toddler', you'll get a variety of blogs and opinion based articles but few factual sites. The most legitimate information on it that I could find and the apparent original source of this myth the Raising Boys book states only '(testosterone) levels drop a few months after birth, and will rise again at age 4 or 5 for reasons that no one understands'.
Apparently, according to the author (who is by the way a psychologist and not a biochemist or medical doctor) the levels of testosterone surges to double that experienced as a baby and then reduces back to about half that at age 5 (where apparently it steadies). This testosterone surge causes your four year old boy to throw tantrums, disregard parents and generally behave in an unruly manner.
Interestingly, although this stance says that the surge happens at 4, that has been expanded by those using it to explain bad behaviour from age three onward.

Testosterone and behaviour
I'm just going to hold whether there is or isn't a testosterone surge to the side for a minute and look at whether testosterone could even be the cause for such behaviour.
First of all, this assumes that 4 year old boys behaviour is worse than that of girls of the same age. Although as the mother of a 2 year old girl, I would love to consider that to be true it is certainly not the case from 3 to 4 year old girls that I know.
Anyway, the link between testosterone and behaviour is contentious to say the least. The most that can be said from years of studies is that increased testosterone may be linked to increased levels of aggression 1 but there is certainly no link between testosterone and inattention or overactivity 2. So, if four years old suddenly started to fight or behave in an agressive manner it could be linked to an increase in testosterone. However, a four year old who does not listen or is generally acting up is not likely to be caused by any hormonal changes.

Interestingly, if you look at this other nice little diagram it would appear that testosterone is actually far more stable throughout childhood than the female hormone oestradiol which is more subject to 'surges' and 'lulls' 3. So if anyone is going to be claiming hormonal variations as the cause for challenging behaviour, it should be parents of girls not boys. 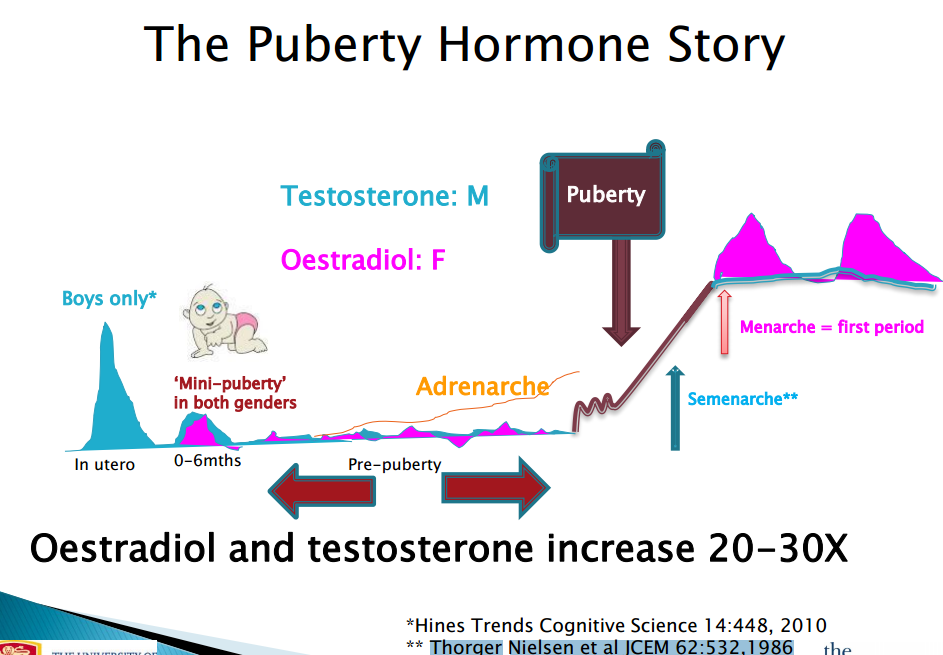 So there is no testosterone surge in early childhood or throughout childhood at all. Even if there was, it would possibly explain an increased level of aggression but no other behavioural change.

Does it matter?
Maybe not. Maybe its a reassuring myth, telling parents that this too shall pass.
But I think it does matter. I dislike,  the medicalisation of behavioural issues that your child presents. First its the milk upsetting their stomachs, then its  teeth, then its hormones. Your kids are tired, or they're hungry or they're sick. There always seems to be some physical reason for why children are being challenging. But maybe there's not. Maybe challenging behaviour is due to developmental changes and a child trying to express or cope with new sensations and ability or maybe its caused by inconsistent discipline or unrealistic expectations. By disregarding their behaviour by explaining it away due to physical things, maybe we are missing what that behaviour is actually trying to tell us.