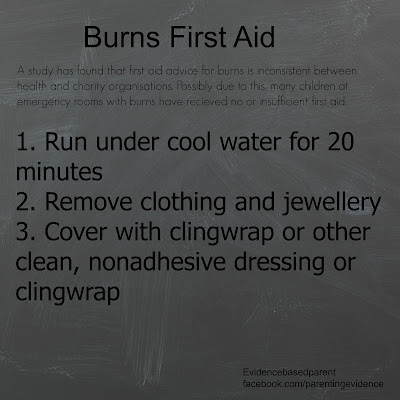 First aid advice for burns has been found to be inconsistent between UK health organisations and charity. The  official advice is hold under cool running tap water for 20 minutes, remove clothing and jewellery, cover the burn with cling-wrap or a clean non-adhesive dressing.


Parenting
The type of emotional parenting provided by the parent alongside school discipline, teaching about emotions in the curriculum and peer group factors were found to significantly impact on children's emotional intelligence.

Parents who understood their teenager's strengths and encouraged them to use those strengths were found to have teenagers with higher life satisfaction than those who did not.

Teenagers whose mothers had had postnatal depression or anxiety were found to be more likely to have problems with math than those who did not.

Helicopter parenting was found to predict poorer adjustment to college however young adults with higher emotional intelligence were found to be somewhat protected from this effect.

A study of young adults found that returning to the parental home after leaving was associated with more conflict but not greater parental closeness.
Email Post