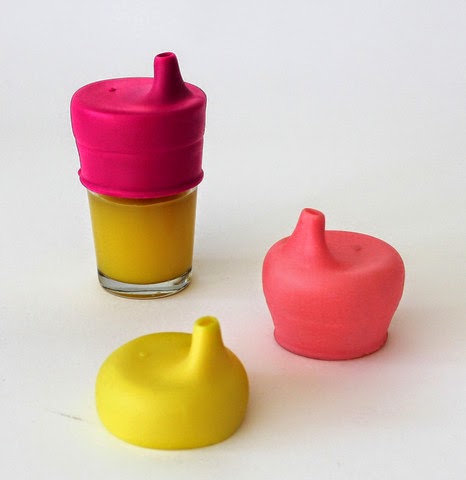 So I saw this product over the last week and got myself all worked up about how ridiculous people are. The lids, which sell for 21 dollars for 3, are intended to fit onto any cup allowing you to use any cup as a sippy cup.
Personally, I only used sippy cups when MissC was too little to hold a cup and when we were out and about. I thought sippy cups were designed primarily to prevent the whole drink from being spilled while the cup went flying from the high chair to the floor. Since this means I would never give her a cup that wasn't made of plastic, the whole product appears completely pointless.

Then I read the comments and realised that people were giving sippy cups to their older toddlers with some mothers announcing they had 5 year olds using them. To me, the idea of a child over the age of 2 using a sippy cup is a totally ridiculous thing to do - infantilising your child and preventing them from developing necessary skills just so they won't make a mess.
As always when I jump to such judgemental conclusions - I did two things - first I went and discussed it with an equally judgemental friend so we could agree that we were right. Then I went and looked for some evidence to back me up.

First of all, it appears that my conclusion that sippy cups are only for babies is wrong with one study showing that almost 70% of children between 1 and 4 are using a sippy cup 1. For the purpose of this article - a sippy cup refers to a cup which requires a child to suck on it to get the beverage as opposed to a cup with a lid on it but from which the beverage is freeflowing.

So what's the harm in it?
Tooth decay
The biggest thing that comes up again and again is the damage to their teeth. Continued sucking is considered to be quite a bad habit for children's teeth 2. This is particularly an issue when any beverage that isn't water is put into a sippy cup as it means that the liquid spends a lot of time pooling around the child's teeth. This is considered a leading cause of child tooth decay, a problem that is painful, expensive and may require hospitalisation to resolve 3. For this reason, dental recommendations are that sippy cups are only used for water and non-sugar containing drinks 4. A  recommendation which is mostly being ignored since a study has shown that the majority of children using sippy cups are using it to drink diluted fruit juice 1.

Weight gain
Sippy cups have the potential to lead to all day drinking for two reasons. First of all, the slow flow of drink through the teat means young children spend a long time with the teat in their mouth which can lead to comfort sucking rather than drinking due to thirst. The easy portability of a sippy cup also means the child is more likely to carry it around with them making all day drinking simpler. If the sippy cup contains any liquid asidefrom water, this all day drinking can lead to excess liquid calorie consumption 5 and excess fat gain 6.

Skill development
Using an open cup or a free flow cup helps babies learn how to sip rather than how to suck. For this reason it is recommended that babies be introduced to a free flowing cup rather than a sippy cup 7. In children with developmental delays there may be problems in forming skills due to the use of a sippy cup 8 but this does not appear to be the case in  neurotypical children.
However, a child over the age of 2 can be reasonably expected to drink from a cup without spilling it.  Having the expectation that they can not, as shown by giving a child a sippy cup when they are not requesting one, can be damaging to their overall development 9. A sippy cup alone is unlikely to be damaging but if the infantilisation it represents extends to the use of other utensils and other self care activities it has the potential to be.


So have I changed my mind based on this? Not really, I still think the product is ridiculous and unnecessary however the harm of using a sippy cup to present non-sweetened liquids is probably minimal. And possibly worth it if you really hate mess.