A great deal of findings were found on the influence of parenting on children's development.
Additionally, other studies have shown effects from the environment regardless of parenting level. 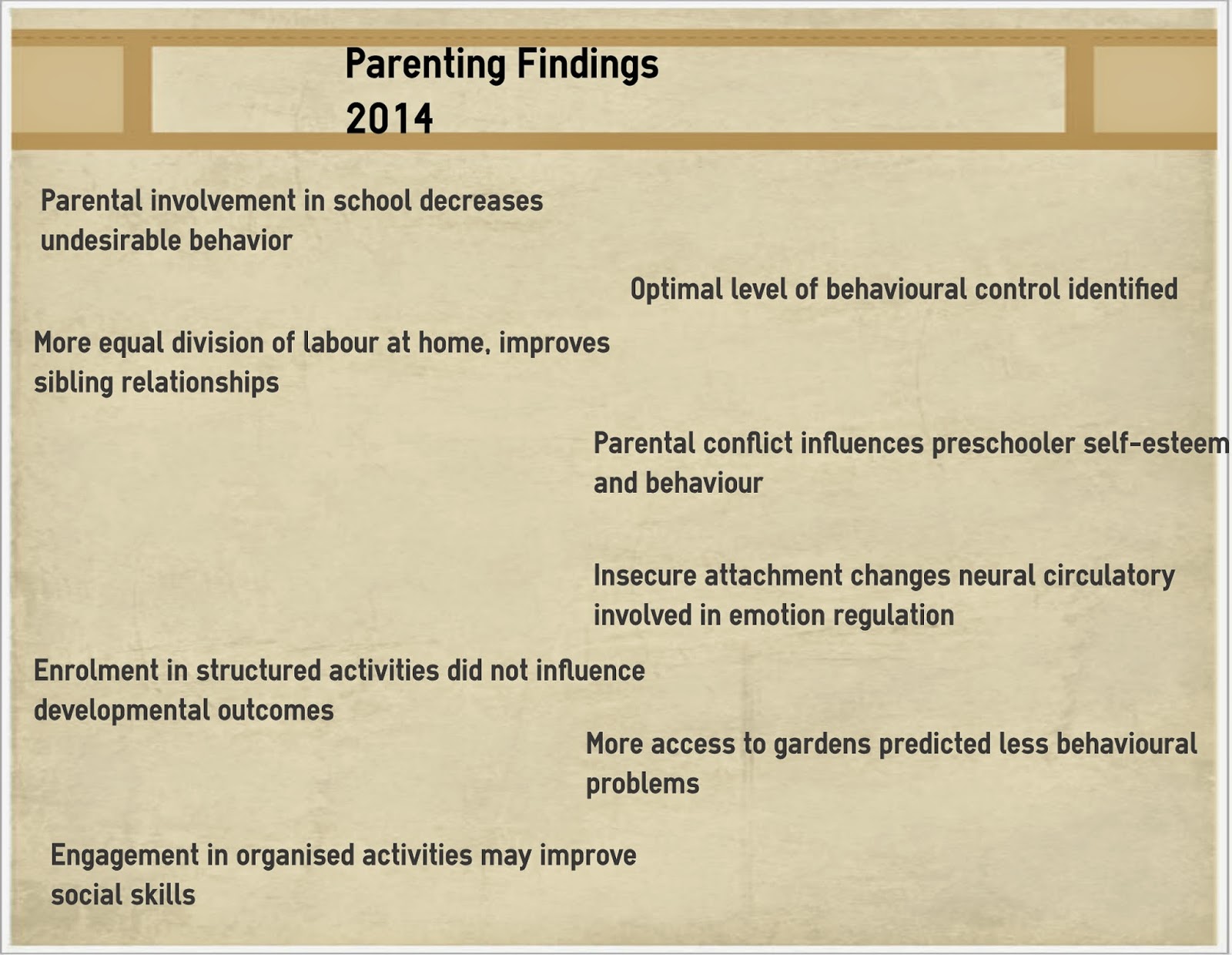 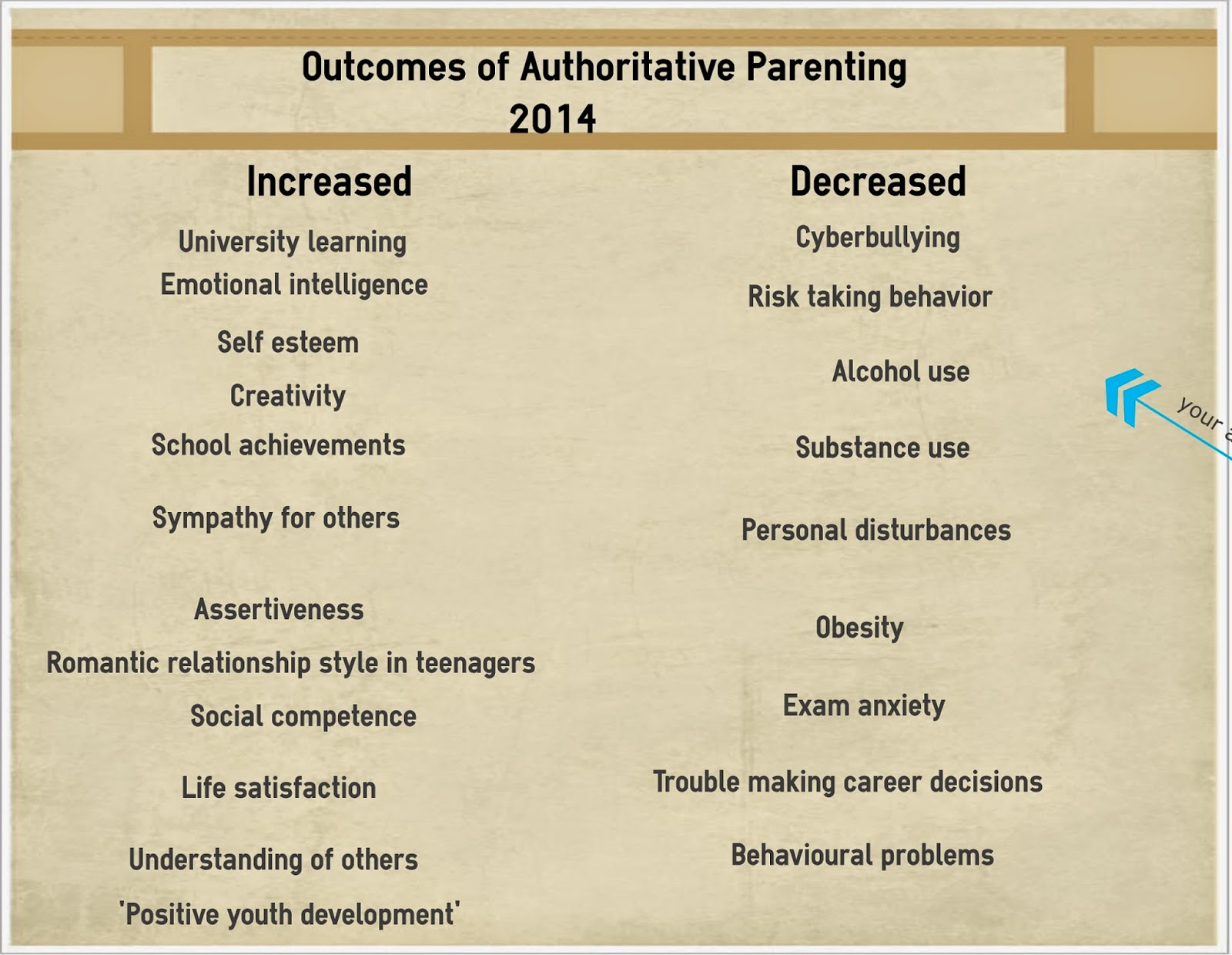 BMI
More evidence this year on the need to watch your child's BMI with higher BMIs being linked to:

Parents however were found to not be able to be accurate in the judging of their child's weight status so frequent weighing and measuring of your child was recommended.

Factors found to increase child's BMI or to cause unhealthy eating patterns were:


Increased physical activity was also found to be beneficial being associated with improved behaviour in the classroom, higher self-reported health, lower substance use and better psychological health.

Health
Parenting styles were shown to have a significant impact on the health of children this year. Most importantly a longitudinal study found long term health problems were more common in people who had had high levels of adversity in childhood or whose parents had shown low levels of warmth. More positive warm parenting was also found to be related to missing/decaying teeth and teenage eating disorders. While strong family connections were linked to more responsible sex practices in teenagers.
Along the same lines, authoritarian parenting was found to be the worse for your child's health (aside from a decrease in drinking) with children of authoritarian parents found to have worse movement skills, more cavities, more likely to smoke and be more likely to engage in extreme weight control behaviors. 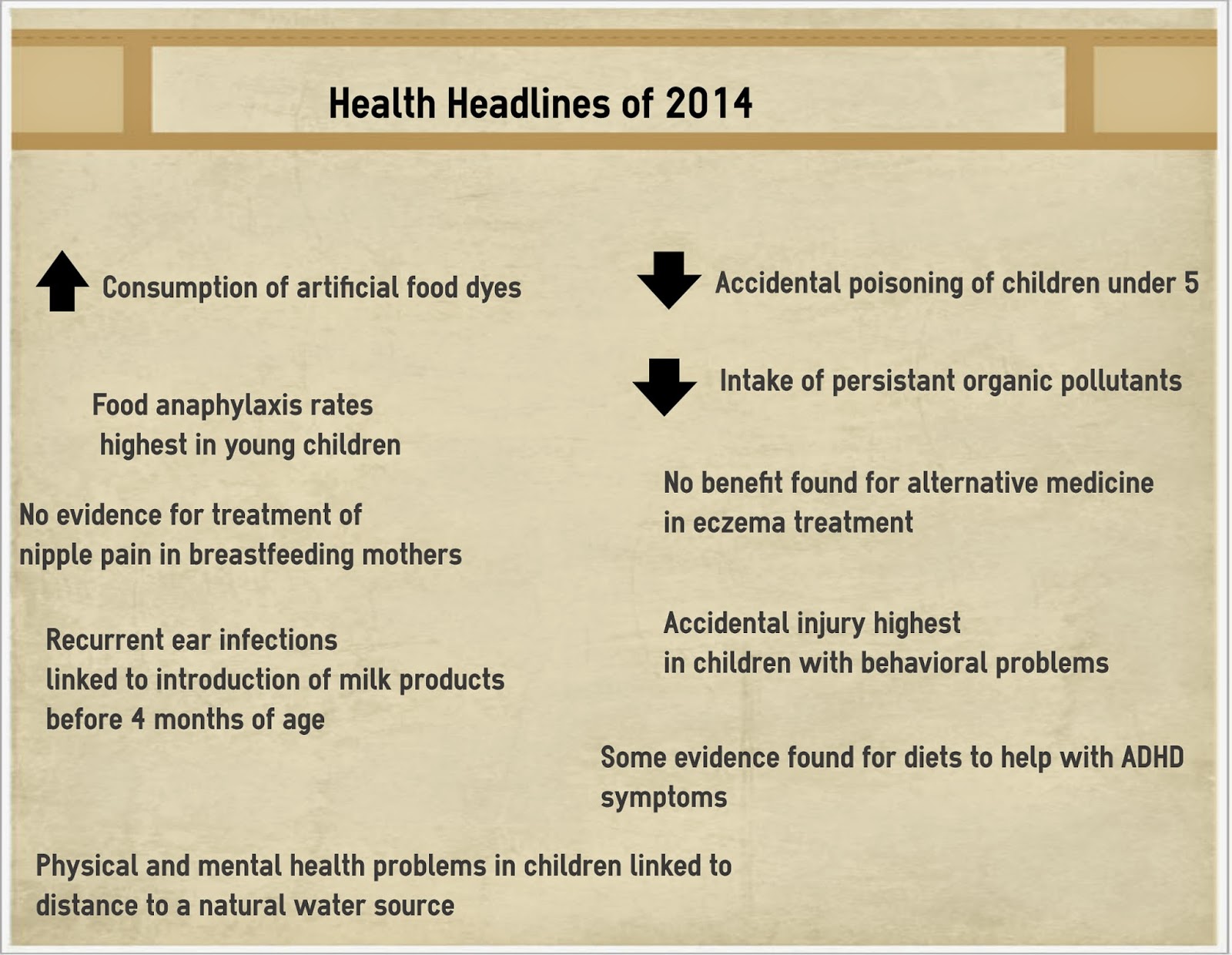 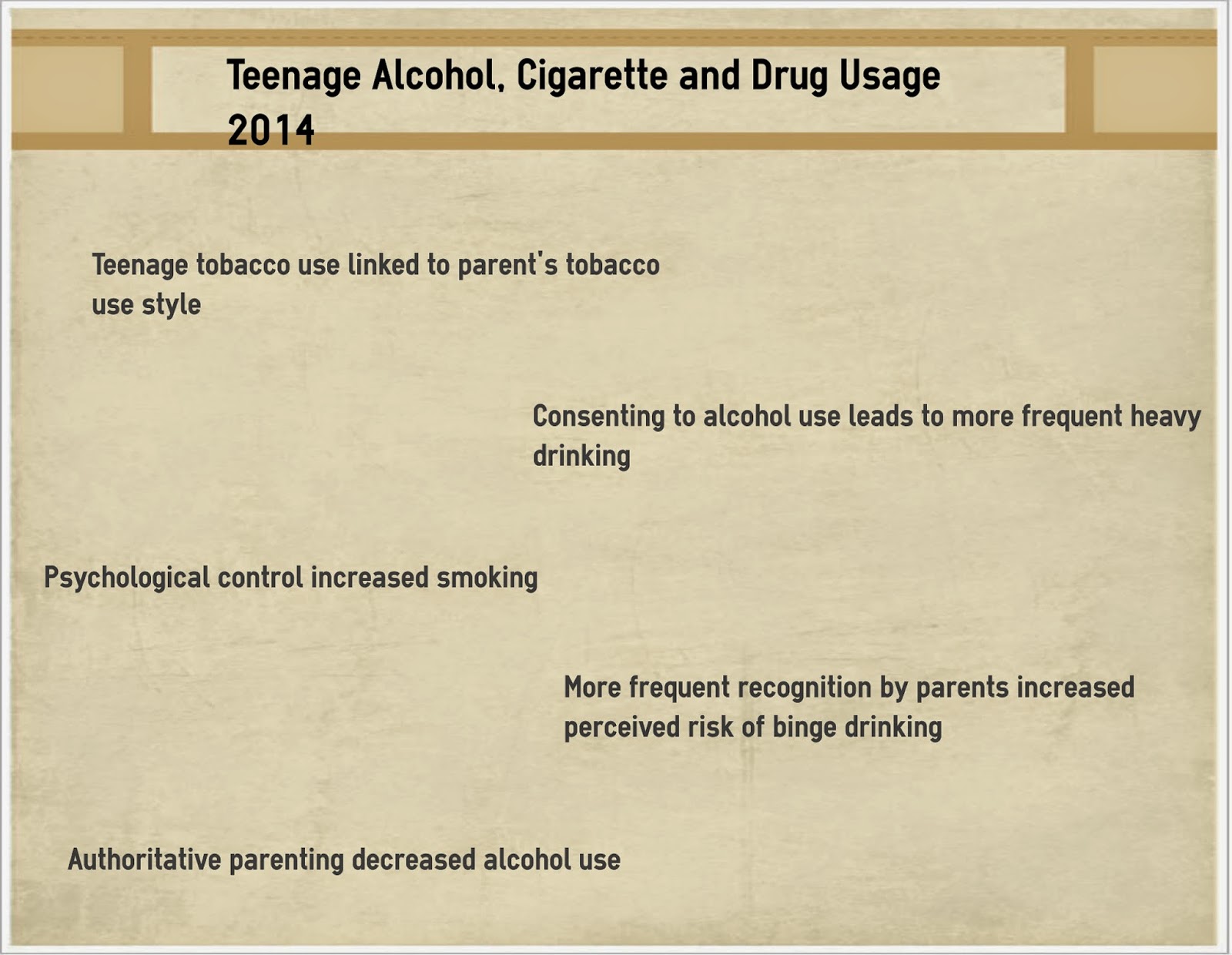 Screens
Although it was suggested this year that the dangers of screen time are overstated, the research primarily found negative findings. Children's comprehension of reading was found to be lower in an electronic format, video games were found to be linked to disruptive deficits, ability and physical deficits in teenagers, cognitive problems from exposure to background television and increased screen use was found to be disruptive on sleep. The only positive findings were some benefit for screen use in preventing dyslexia and an increased activity level from using active video games.

Sleep
The benefits of a good nights sleep were again restated with poor sleep associated with:

DNA
Several studies this year found that genetic variations and other physiological factors worked to make children more susceptible to the effects of parenting.
Effects were found on:

Genetic variation was also found to impact on parenting behaviour, particularly in showing warmth and sensitivity


Pregnancy
Research this year found that your attitude towards parenting and your ability to be a good parent during pregnancy was beneficial to both your mental health and your relationship with your child. 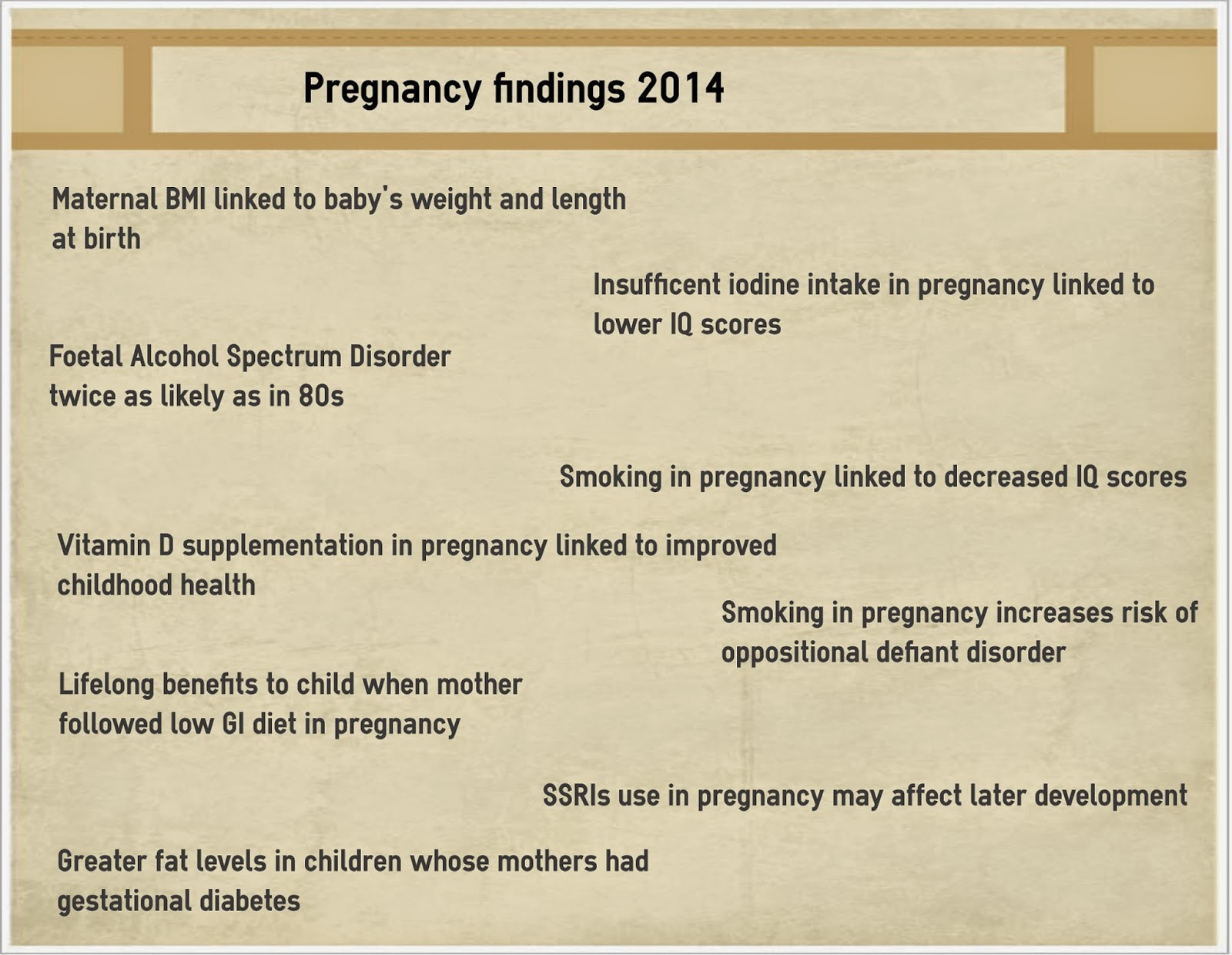