Child Obesity: Why it matters

Childhood obesity is considered by researchers and health policy makers to be an extremely important issue. In fact many consider it in fact a global crises and the World Health Organisation considers it such an important threat they have established a commission yet parents consistently underestimate its impact. Studies have shown that parents not only misjudge their child's weight status but remain largely unaware or unconcerned of the importance of  being overweight or obese on their child long term. This is in spite of the fact that more than 20% of children are either overweight or obese meaning that a substantial percentage of parents should be dealing with this issue 1.
Parents may excuse the issue as being 'how they are' or 'puppy fat' that the children will outgrow. Certainly childhood is a unique period of life from the respect of weight in that the body naturally loses fat over the pre-school years while maintaining skeletal and muscle growth. This makes it even more important to maintain children's body weight in a healthy area over this time in order to gain the maximum advantage of these natural rhythm.
Obesity is shown to have tracked strongly overtime so that obese children are far more likely to grow into obese adults 1. Part of this may be due to genetics, however research has shown that genes play only a small role. Many genes that predispose to obesity may only be triggered in the presence of environmental factors so an increase in weight may actually trigger a gene that makes it more difficult to lose weight in the future. It is also believed that hormonal actions regulate weight by determine a 'set point' to which adults will struggle to deviate from as adults 1.
All of these factors mean that obese children are more likely to turn into obese adults with all the associated health risks that this brings. Furthermore, obesity in children brings its own specific health consequences. 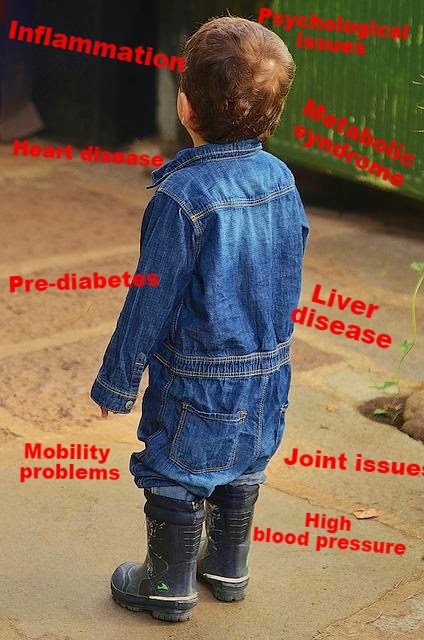 For some of these issues, the earlier onset of the condition means that the child faces a greater risk of consequences. For example, damage to the kidneys, eyes and heart occurs in pre-diabetes but as the damage is small it is unlikely to be significant to an older adult. However when pre-diabete occurs in a child it may mean blindness, kidney failure and heart disease by their thirties or forties. For other conditions, the effects may be magnified by occurring at a young age. Teenagers who develop obesity related type 2 diabetes have been found to have a 10% death rate and 5% rate of kidney failure within 15 years.
Furthermore, the health issues are also occurring at a time of identity formation and the creation of autonomy and may impact on these factors. A study has shown a specific decrease in autonomy and relations with parents in children with increased BMI which impacts on psychological well-being, particularly as children approach adolescence 2.